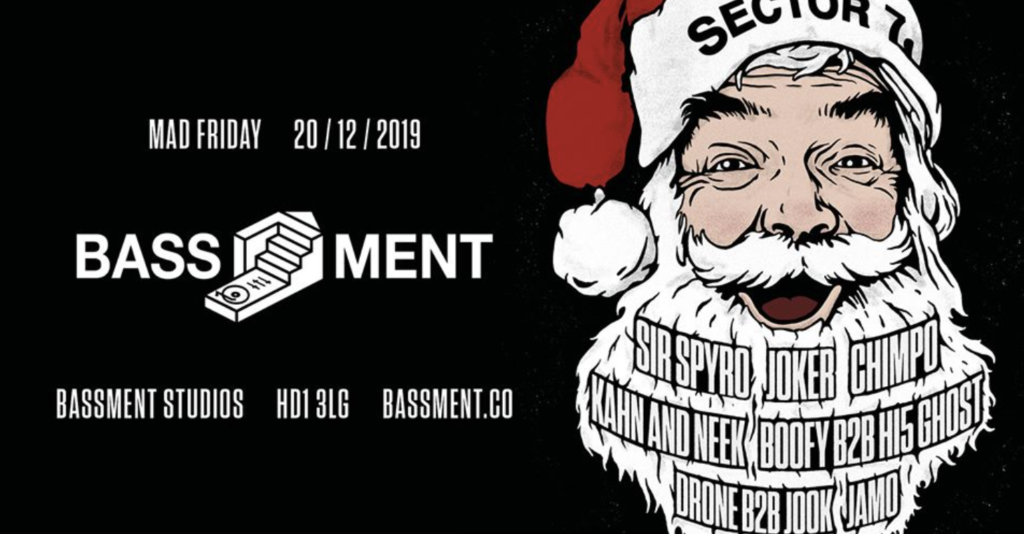 Bassment’s Mad Friday – An ode to Dubstep and More

The final event in a year full of explosive events, including a Full Levelz line up and a sold-out 6th birthday which boasted acts like D Double E and Big Zuu, Bassment’s Mad Friday event will be a masterclass in 140BPM excellence.

Selling their first 50 tickets in under 20 mins the aptly hyped event will take place today (20th) from 22:00 pm – 4:00 am with the line-up bringing together a myriad of artists whose individual legacies would merit a night of their own.

Kicking off the night in true Dubstep fashion, the night will be kicked off by the slick, technical stylings of Bassment resident Jamo, one of Huddersfield’s most promising talents.

From there Bristol’s Sector 7 usher in the true naughtiness of the night with two dutty b2bs from Drone & Jook, and Boofy & Hi5 Ghost – all immensely talented in their own right.

One of the most revered in the UK scene, ‘Grime’s go-to selector’ – Sir Spyro, someone whose been laying down fire on the decks since he was 10, is set to rev up the night through his sharp, bombastic mix style. With his ear finely tuned to the current cream of the crop of trends, his 00:30 – 01:30 slot will bring raw energy guaranteed to get even the most novice 140BPM fans into a frenzy.

Taking over from there Bristol Juggernaughts, Kahn and Neek will be laying some serious heavyweight ferocity as their typically darker style of dubstep launches the night’s peak into a different realm of bassiness. A treat for the most dedicated fans, their set will be nothing short of magnificent.

Joker, an important artist in the late noughties’ second wave of promising Bristol dubstep DJs, will lay down a set which will demonstrate why he’s such an integral player right now. Having played at Fabric, a common theme amongst some of the artists featured, and Sonar festival, the Kapsize records boss’ fluid and hectic musicality will truly shake up the venue.

Relentless and fiendish, Levelz associate Chimpo, one of Manchester’s most talented DJs, is likely to unleash his raw energised Jungle and a selection of other Bass genres to see the final 100m dash of the night with a bang.

Powered by Six Scoops of Sinai Sound System, the event is a must for all Bassheads.