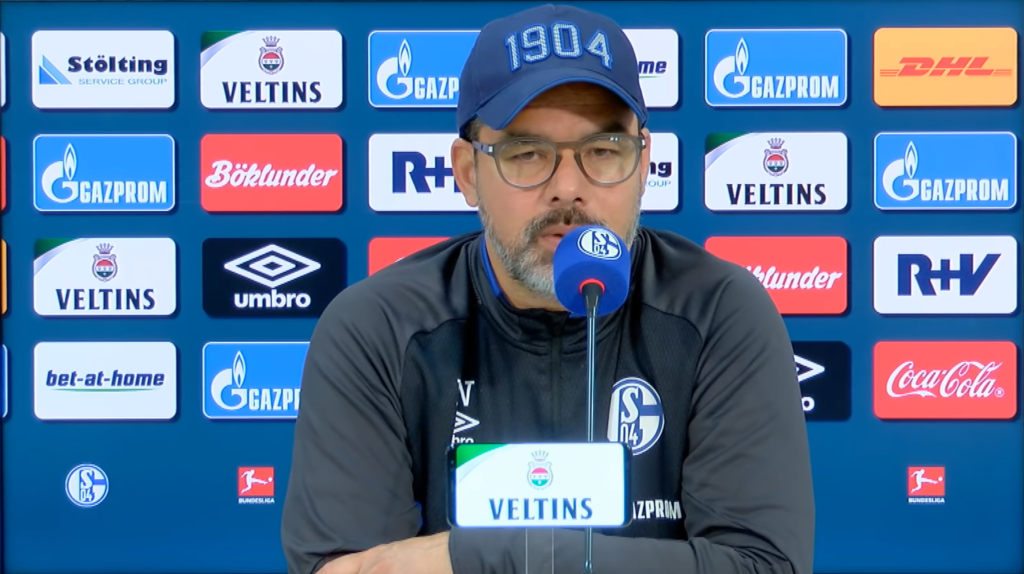 “It was a poor performance and we conceded goals at bad moments – both before and just after the break. We weren’t brave enough today.”

That was David Wagner’s assessment following his sides 4-0 defeat in the 180th, and most unusual, Revier Derby against Borussia Dortmund in the recently returned Bundesliga.

As normal post-match press conferences are not permitted at the moment, Wagner spoke to journalists online, going on to say: “We didn’t have a feeling of where we were at today. Our defending wasn’t good enough and we deserved to lose the game.”

The return of the Bundesliga has gathered much interest and coverage, with BT Sport (who have the broadcasting rights for the German leagues in the UK) recording higher viewing figures than their average for Premier League fixtures.

For Huddersfield Town fans, FC Schalke 04 are the obvious choice as a new team to follow while waiting for football in England to restart. Wagner has managed both clubs, they both play in blue, and unfortunately, they regularly both get outplayed by their more successful local rivals.

For the opening 10 minutes of this game though, Schalke did look bright. Dortmund struggled to progress the ball up the pitch and get beyond the pressing of the Royal Blues, something that Town fans will have been used to seeing from a Wagner team. Schalke matched BVB in terms of formation (3-4-3), allowing their front three of Caligiuri, Raman and Harit to push high up and limit the time that Hummels, Akanji and Piszczek had on the ball.

The absence of Axel Witsel and Emre Can from the Dortmund midfield, as well as Jadon Sancho only being fit enough for the bench, provided a boost to Schalke’s hopes of denting Dortmund’s push to challenge Bayern Munich for the title.

However, thanks to the positional rotation of Thorgan Hazard and Julain Brandt, Dortmund began to create space out wide, allowing them to progress the ball beyond the Schalke press and drag the back three out of position. Indeed, the opening goal came from a passage of play such as this.

Schalke’s midfield pair of Serdar and McKennie were dragged towards the left so that they could press Dahoud and Delaney. As Hummels played the ball across to Piszczek, Brandt was able to occupy the space that had been vacated by the Schalke midfield in the right-hand side channel. Piszczek took a touchback inside to beat the press of Harit and then played the ball forward to Brandt, who, with the outside of his right foot, played a delightful flicked pass in behind the oncoming Nastasic and into the path of Hazard. With Schalke running back towards their own goal, Hazard crossed for Erling Haaland who made a difficult finish look easy. 1-0, and “Olè, Jetzt kommt der BVB!” (to the tune of Go West by the Pet Shop Boys) echoed around the empty Signal Iduna Park.

As half time approached, a poor clearance from goalkeeper Markus Schubert was picked up by Dahoud. He then passed into Brandt who, positioned between the midfield and defence of Schalke, turned and played a simple pass into the overlapping Guerreiro whose shot across goal found the bottom corner and doubled Dortmund’s lead.

Two substitutions by Wagner during the break did little to change the course of the match. With Schalke pushing to get back into the game, Dortmund broke from the edge of their 18-yard box. Brandt played a 1-2 with Haaland while Hazard sprinted up the right, creating a 2 v 1 in Dortmund’s favour. Brandt squared the ball to Hazard who smashed the ball through Schubert and into the back of the net to make it 3-0.

Another flowing move added a fourth and final goal for Dortmund. Burki sent a long pass up to Haaland who held off Nastasic to knock the ball down for Brandt. Stepping inside his man, Brandt then switched the ball to Guerreiro who had the freedom of the left flank to drive inside, play a 1-2 with Haaland and score with the outside of his left foot to finish the game.

A lack of attacking threat meant Schalke created an xG (expected goals) value of 0.39 from 10 shots (3 on target). The value is so low primarily because of the poor positions Schalke were shooting from, for example, 7 of their 10 shots came from outside of the box. They also failed to create any ‘Big Chances’, which are shots that have an xG value that is greater than 0.50. By comparison, Dortmund had an xG of 1.30 from 11 shots, 7 of which were from inside the box, and they created 2 ‘Big Chances’.

Dortmund dominated the game and the scoreline, which is ultimately the only statistic that matters, and so managed to keep within 4 points of league leaders Bayern Munich. Schalke, on the other hand, were outclassed and outplayed, unable to deal with the movement and quality of Brandt in particular.

Schalke’s performance in the first half of the season had seen them sit in 5th place, level on points with Dortmund, who were 4th, and so outside of the Champions League spots on goal difference. This latest defeat means that it is now 1 win in their last 11 games, a run of form that has seen them drop to 8th, 14 points from the top 4 and Champions League football, and now 17 points behind Dortmund. Schalke and Huddersfield fans will hope that Wagner can turn this worrying run of form around and still manage to at least qualify for the Europa League.

For some of those who watched the Bundesliga’s return, the absence of fans will have been a strange experience. But this is the game we love, distilled into its purest form, and something we will have to get used to watching as the Premier League prepares its own restart.