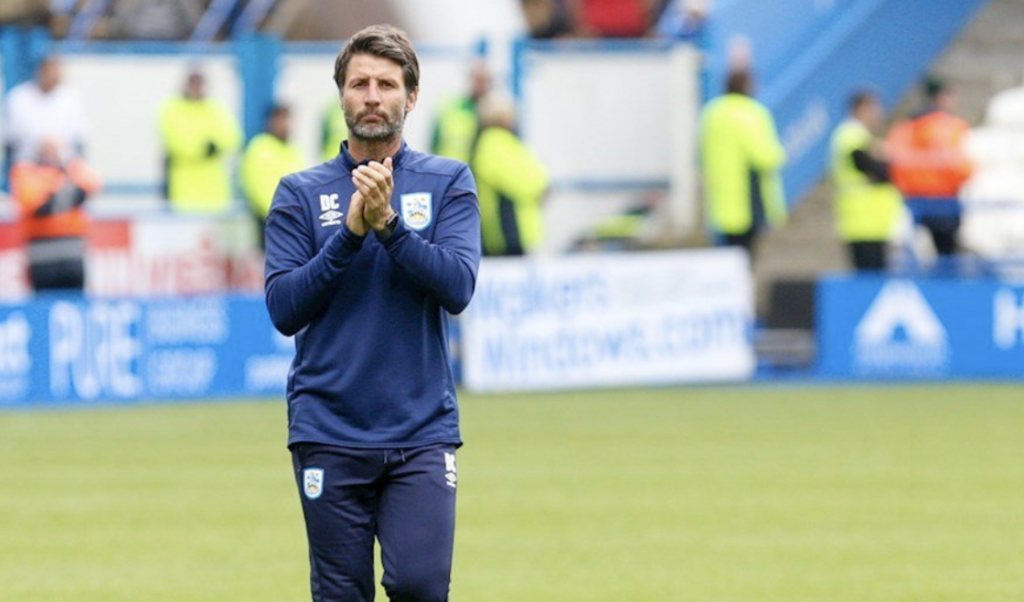 The Terriers boss Danny Cowley has praised his player’ work ethic and attitude since the return to First Team training.

The training comes as preparation for the potential return of the Sky Bet Championship season.

In a recent interview with HTTV, Danny Cowley explained what the return to training has been like.

He said: “It’s been different as we’ve been coaching in small groups. We’ve only been able to have five players on the grass at any time.

“We’ve has a group at a time, 80 minutes per group, and had five groups a day, so they’ve been long days but worthwhile ones.

“It’s been great to work with the players in the one-to-one nature, we’ve been able to get some really good work into them.

“In the early part of the week, we were able to work in departments, so defenders in a group, midfielders, forwards, then in the latter part of the week we moved on to the right side of the team together, left side and then central.

“It’s been good to develop relationships with the players.

“When you work with the players on this bases, you naturally have more contact time with them and hopefully you’re able to influence them more than maybe when you work with 20-22 people at one time.”

During the time away from training, the players have had to follow a specific strength and fitness programme, so that they return to training in a good physical condition.

Cowley proclaimed how pleased he was with how the players have handled the return during this difficult period.

He said: “We’ve got some really good work into the players. I’ve been really impressed with their level of fitness.

“Credit to the coaching and sports science team to how the players have been looked after in that area.

“We are in a really good place, so credit to the players because their attitude and work ethic have been excellent.

“We worked really hard with them during the lockdown on the physical aspect. We were able to do some video sessions and strength and conditioning work, but it was all remote work.

“We were also able to do some physical work and really affect their aerobic capacity, but it was all very straight liney.

Danny added that recently in the last two weeks of strict lockdown, the team has been able to do more individual work and football-related movement and that it has helped the players come back to training strong.

“Of course, this part of our training at the minute is quite physically orientated, but at the same time we try and affect the technical and tactical aspects of the game.

“It’s been valuable for us really, when you take over a team mid-season, you get the pre-season that somebody else has planned, prepared and delivered. To have this time has been invaluable.

“We feel like we’ve made some real gains. Now we are looking forward to the next stage to go into some contact training.”

Players have been back in training since 25 May, initially while following social distancing guidelines, and full contact training will begin next week.

As for the return of the Sky Bet Championship, a restart date of 20 June has been set.

The date is said to be “provisional” and “subject to the strict proviso that all safety requirements and government guidance is met” according to the EFL.

No Championship fixtures have been played since 8 March, with the campaign suspended five days later.

There are 108 matches remaining, plus the play off semi-finals and final. It is hoped that the entire Championship campaign will be completed by 30 July or near enough to that date.

In addition to this, there are ongoing discussions on proposals to permit the use of five substitutes in the remaining fixtures and increasing matchday squads from 18 to 20 players.

The announcement came after the UK government gave the green light for the domestic competitive sport to return, behind closed doors, from Monday.

An EFL statement about the situation read: “Following Saturday’s announcement by the government to allow elite sporting events to return behind closed doors, the EFL has this weekend agreed to a provisional restart date of the weekend of 20 June 2020 for matches in the Sky Bet Championship.

“After discussing various approaches and the importance of completing the season in a similar timeline to that of the Premier League to avoid any potential issues with promoted and relegated clubs, the Sky Bet Championship season is set to conclude with the Championship play-off final on or around 30 July 2020.”