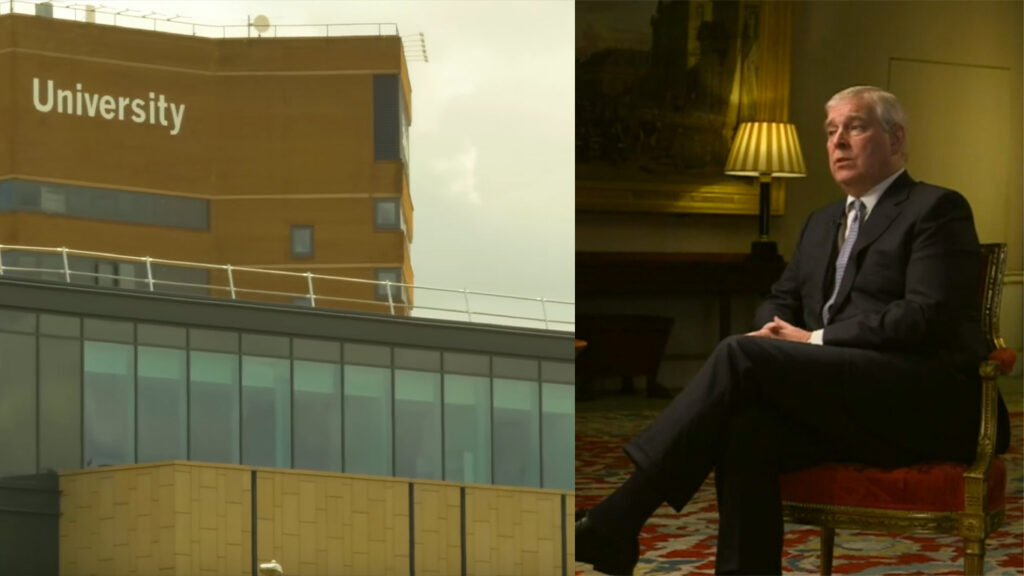 University of Huddersfield Urged to Cut Ties With Prince Andrew

The University of Huddersfield has been urged by both members of the Public and some of its own staff, to cut ties with its own Chancellor, Prince Andrew, in light of recent allegations.

The prince denied having sex with a teenager as part of the Jeffery Epstein scandal.

This August, Dr Stephen Dorril called on the university to take action after the allegations. Dr Dorril is the Senior Lecturer in Print Journalism at the university’s journalism and media department.

He said: “Could you inform what action and procedures the university is taking to safeguard the good name and values of the institution as laid in the University Council documents.”

He continued: “Can I ask what procedures are now being instigated to protect and safeguard young people and whether the university’s own regulations are being followed?

“I would presume that following precedent; such a person would be immediately suspended whilst the correct procedures are followed.”

The Duke of York and Chancellor of the University of Huddersfield denied ‘any sort of sexual contact whatever” with Virginia Roberts at Tramp nightclub in London, 2001.

In an interview with the BBC, he said he was over 30 miles away at a Pizza Express with his daughter.

The BBC Newsnight interview was seen by critics as a “car crash” and many are in an uproar that Prince Andrew didn’t apologise for his further involvement with Epstein despite the allegations against him at the time.

During the interview, Prince Andrew told the BBC that he didn’t regret his relationship with Epstein as it had “serious beneficial outcomes for him” and that he never suspected Epstein’s criminal behaviour during visits to his home.

Spencer Kurvin told the Today program: “It was depressing that he [Prince Andrew] really did not acknowledge the breadth of his friendship with this despicable man and apologise.

“The mere fact that he was friends with a convicted sex offender and chose to continue his relationship with him – it just shows a lack of acknowledgement of the breadth of what this man [Epstein] did to these girls.”

After this interview questions have been once again raised about the University’s ties with the Duke of York.

A spokesman for the university has said: “HRH, The Duke of York, has long ties with the University stretching back to his first visit in 2001.

“As Chancellor, he has taken a keen interest in the work of the university and has represented it in his official capacity on numerous occasions.

“His enthusiasm for innovation and entrepreneurship is a natural fit with the work of the University and every year the University of Huddersfield organises The Duke of York Young Entrepreneur Awards, which are promoted across universities throughout the north of England.

“In relation to the allegations, The Palace has previously issued an emphatic denial and this was reiterated in the BBC interview with The Duke of York and we have nothing further to add.”