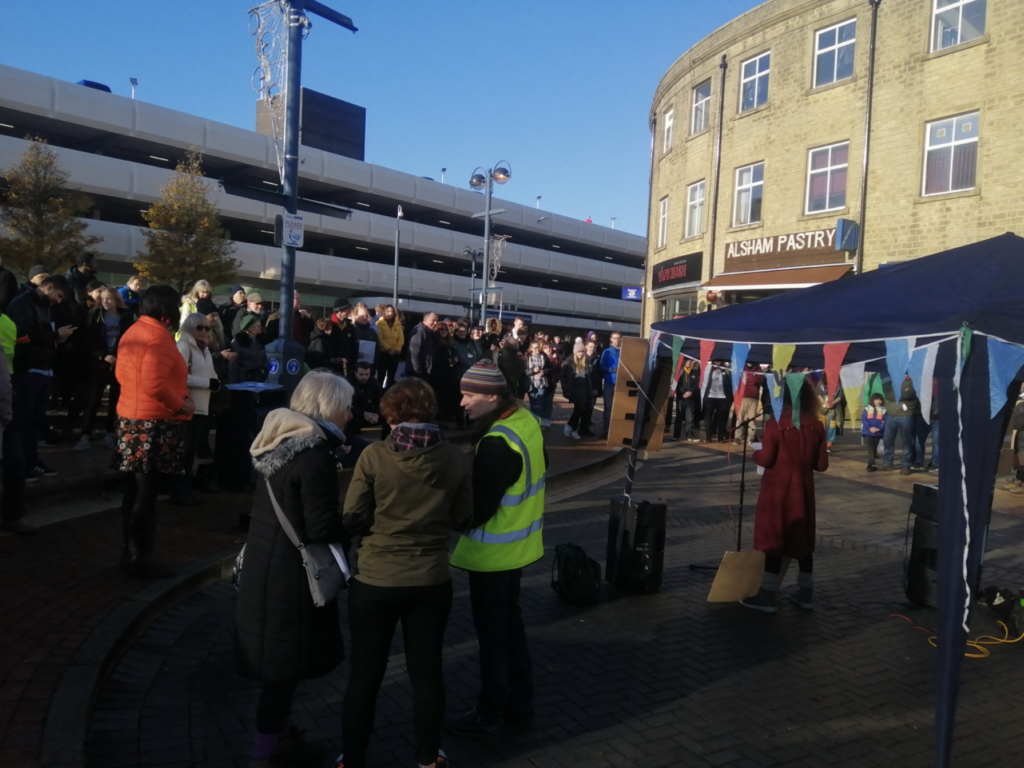 In the spirit of opposing the non-sustainable consumerist attitudes that events like Black Friday indulge in, YouthStrike4Climate Huddersfield made a stand outside the local bus station at 12PM through till 1:30 PM in an effort to maintain the urgency of Kirklees’ recent climate emergency declaration.

Emphasising the pressure that needs to be put upon governments, with Huddersfield’s Labour and the Green party representative’s presences solidifying these intentions, the strike comes at an important time in UK politics. Bringing together people from all backgrounds, the strike didn’t aim to pick a political side but instead educate those attending through a series of emotionally poignant speeches and stalls promoting vegan foods, up-cycled fashion, socialism and environmental information.

Kicking off with an energised samba band performance, interest was quickly drummed up with the surrounding bus station area attracting a strong amount of foot traffic to the issue. Following the initial gathering, a series of guest speakers and youth representatives took to the mic to express their problems with current climate change issues.

Touching on issues ranging from the ‘mockage’ and lack of seriousness towards climate change to the climate emergency at the university to western society’s impact on third world countries, the speeches encompassed a feeling of dissatisfaction towards current governmental systems in place.

With representation from The University, Inter-Faith Communities, The E.A.M, Extinction Rebellion and Greenhead College as well as a variety of green industry experts, the sentiments felt like an outcry for the safeguarding of our planet. Ranging from 13 to 60 the unity the protest produced echoed the frustrations Huddersfield has been feeling in relation to the meagre efforts of its governments.

The speeches also aimed to indicate that the current UK government isn’t doing enough to combat issues, with ‘major systematic changes’ needing to be made to avoid climate catastrophe.

Interspersed with a performance from Jenny O’Sullivan, with reflected a vision of fruitful living against bleak future livings, and a poetry reading from Norah Hamill, an empowering lift from the despair our future may contain, the statements made were meet with roars of approval.

With the obvious presence of an environmentally awakened community so present in Huddersfield, we can only hope that Kirklees keeps to its climate emergency promises as the matter becomes more pressing by the day.

Iby Shared with us the importance of the education and remembrance of those events over 75 years ago. We also take a look at the new Exhibition at 'Through Our Eyes' from the HSFA, now open at the University of Huddersfield.

A special thanks to Iby Knill and the HSFA, as well as Faith PR and the University of Huddersfield.

Learn more about Iby and her story here: ibyknill.co.uk/index/

For more information about the "Through Our Eyes' exhibition visit: holocaustlearning.org.uk/visit-us/

A pinnacle institution within Kirklees’ arts realm, Musica Kirklees has been at the forefront of building a musical blueprint within the area for the past 28 years. KLTV’s Dan Antunes sat down with Ceo and Principal, Tom Meredith, to discuss the future of the organisation, it’s role in nurturing young talent and how it plans to move with contemporary tastes as well as much more. ... See MoreSee Less