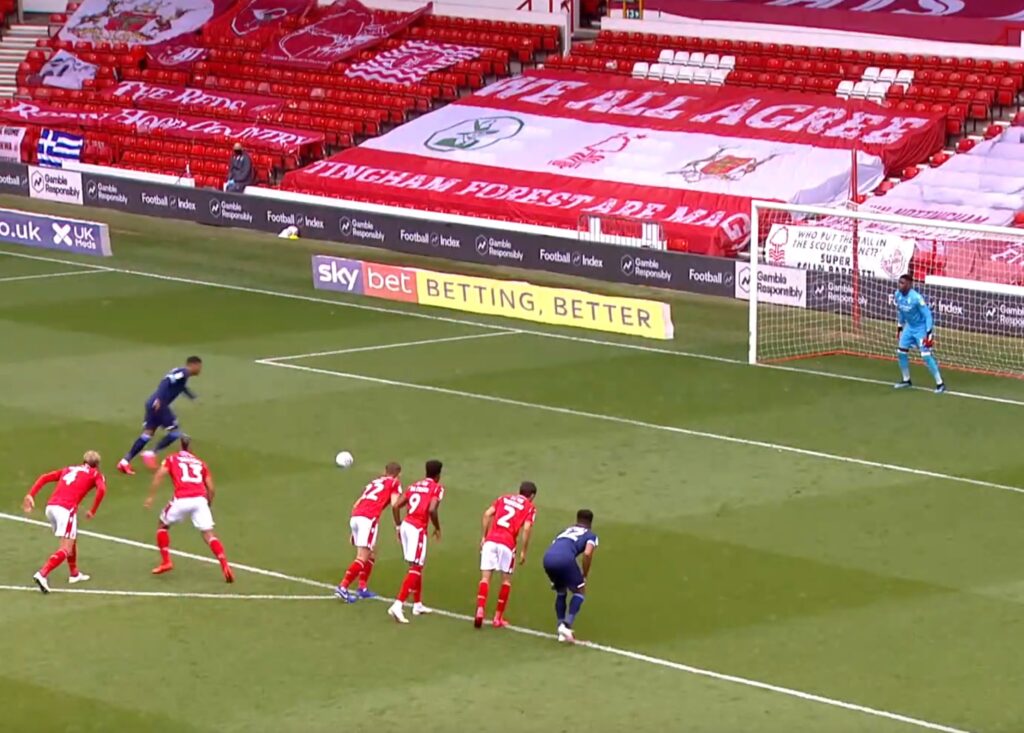 Only Swindon (1994-1995), Wolverhampton Wanderers (2012-13), and Sunderland (2017-18) have been relegated from the Premier League and relegated again the following season, and Huddersfield Town has 7 games in 22 days to avoid the same fate.

Defeat last week to fellow strugglers Wigan Athletic was far from the ideal start to this post-lockdown, behind closed doors, mini-season, and Saturday’s results meant that Huddersfield went into their game against Nottingham Forest in the relegation zone on goal difference.

Danny Cowley made 3 changes to his starting line-up from the Wigan game, with Demeaco Duhaney, Andy King, and Alex Pritchard coming in for Danny Simpson, Juninho Bacuna, and Emile Smith-Rowe.

Forest went into the game with 1 win in 7, and failing to score a goal at home in their previous 3 games. However, perhaps teams form pre-lockdown should be disregarded given the large gap between games.

Huddersfield started the game well, getting on the ball and pushing Forest back to the edge of their own 18-yard box. However, it was Forest who created the first major chance by breaking down the right with former Huddersfield player Joe Lolley, who cut the ball back to Sammy Ameobi who hit the post with a first time, side-footed shot.

Two of Huddersfield’s best chances in the first half came from free-kicks. Harry Toffolo, who was pushing high up from full-back, was fouled on the edge of the Forest box, allowing Pritchard to shoot and draw a save from Brice Samba. Then a short free-kick routine allowed Pritchard to slip the ball through the Forest defense to Karlan Grant who fired the ball across goal, looking for a teammate, only for the cross to be put out for a corner by Ameobi.

There were few chances for the rest of the half. Huddersfield were able to keep possession slightly better than Forest, however, there were very few large spells of pressure on either goal. However, as half time approached, Forest made the breakthrough. A corner from the right was played into the Huddersfield box and flew harmlessly over everyone’s head and out to the Forest left where it was picked up by centre back Joe Worrall. Schindler was slow to put Worrall under pressure, allowing him to cross to the back post where Grabban peeled off the back of King to volley in.

Cowley’s half-time team talk was soon out of the window as Forest scored a second shortly after the start of the second half. Grabban, dropping deep for the ball and dragging Schindler out of position, cushioned a header down to Ameobi, who had moved into a central position from the wing. With Schindler pushing up and Stearman dropping very deep, Ameobi was able to play a simple ball through to Grabban who was now running in behind, clean through on goal. He slotted the ball past Lossl and into the bottom corner.

2-0 after 54 seconds of the half starting. With a 2 goal lead, Forest were then able to defend deep, and limit Huddersfield to long shots and set pieces. King hit the crossbar from a corner, Bacuna, on off the bench, struck a free-kick that was saved well by Samba.

A third goal came in the 85th minute. A Forest counter attack won them a corner. The ball was then played into a packed 6-yard box and stabbed in at the near post by Yates. Things went from bad to worse as Bacuna, with the linesman waving for a Huddersfield free-kick, chased after Nuno Da Costa and needlessly took him out from behind, leaving the referee no choice but to send him off

As the game neared its conclusion, Grant broke into the Forest box from the left, cut the ball to the penalty spot, and behind Fraizer Campbell, who was pushed over by Worrall which gave Huddersfield a penalty. Grant fired the ball into the bottom right-hand corner, scoring his 17th goal of the season, and a last-minute consolation in a 3-1 defeat.

The expected goals (xG) suggests that the game should have been closer, but that a defeat was the right outcome. Forest generated an xG of 2.46 to Huddersfield’s 1.58, according to Infogol, although it should be said that a penalty accounts for 0.76 of that rating.

Despite having more possession (53%), Huddersfield did very little with it, which is something that has to be improved upon in the upcoming games.

Perhaps this game was not one that Huddersfield were expected to pick up points. Forest are looking likely for a play-off spot, and they are a side that looks to play on the break rather than dominating possession, which meant they could exploit the gaps left by Toffolo and disrupt the Huddersfield backline.

The result means that going into the last 7 games of the season, Huddersfield are 22nd, level on points Hull above them, and 3 points away from 18th placed Charlton. However, a -17 goal difference is worse than all the sides above them. Only Luton (-27) and Barnsley (-19) below have worse figures.

Speaking to HTTV after the match, Danny Cowley said “I trust the players, as footballers and human beings, while we are down and disappointed at the moment, we are not out and died.

“We will fight really hard at Birmingham; that’s what we intend to do.”

There are winnable fixtures remaining, as well as a must-win fixture against Luton who have returned from lockdown with a win and a draw.

There is still a long way to go this season, but two games and two defeats since the restart is concerning form. Huddersfield need points quickly, and in just over 3 weeks’ time, we will know if Huddersfield fought hard enough to avoid dropping into League One.

KLTV
Previous post Local Lockdowns – What Are They and What Do They Mean for the UK? Next post Kirklees Librarian Receives Commendation for Efforts During Lockdown